DigiDay - "About the Future of Platform Work", Riders' Day 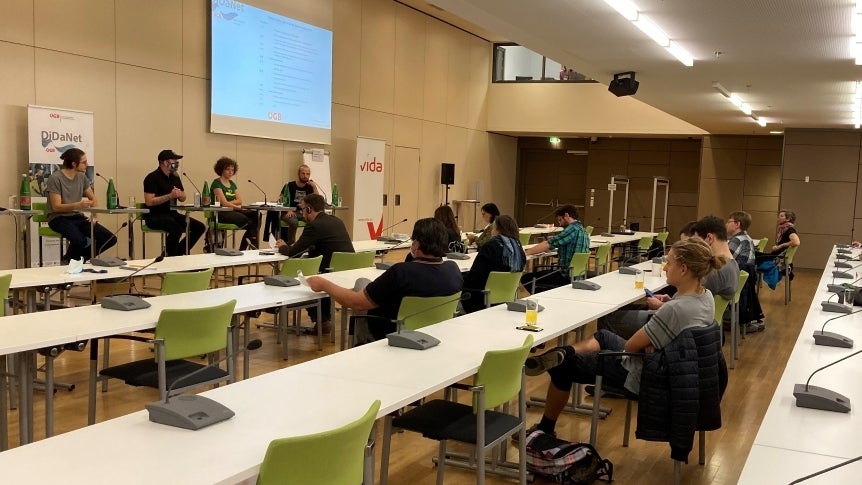 The first Rider’s Day - an information and networking day for Austrian bicycle messengers (“riders”), took place on the occasion of the World Day for Decent Work at the ÖGB headquarters on October 8, 2020. Made possible by the ÖGB project DiDaNet (Digital Danube Network) and with the support of the Ministry of Labour, Family and Youth, the riders were able to learn about the legal differences and possibilities associated with employment contract or freelance contract and inform themselves about the upcoming collective bargaining negotiations. The aim of the event was to speak with one voice together with the Vida union and to demand improvements for EVERYONE, regardless of the contract - whether employed or freelancer (zero hours contractor).

The event was streamed live on the ÖGB YouTube channel. The partner countries Slovenia, Serbia, Moldova and Ukraine were invited to participate. Participants from Brussels (GRESEA, Research Institute for Alternative Economy) and Norway (BR Foodora Oslo) and colleagues from Salzburg also had the opportunity to “stop in” virtually during the day. Thanks to simultaneous interpretation, many colleagues who were not German speakers could also take part without any problems.

After a short video message from ÖGB President Wolfgang Katzian and a short presentation of the DiDaNet project, the moderators were introduced. Then the future works council chairman from Lieferando, a freelance worker and the works council chairwoman from Mjam gave a brief insight into everyday work and the challenges of the riders well as the works councils; but above all, as freelance workers who do not have regular representation in the company. Robert Steier, a lawyer from the union vida (union for all things transport, restaurants, hotels and personal services), gave a lecture on the legal challenges and differences between employees and freelance contractors an went on to discuss the employment relationship of the freelance contractor of the platforms: Are they an employee of the platforms or independent contractors (self-employed)?. After reviewing a number of case histories, it would seem that for the large part, not only do an involvement in the company and personal dependency seem to be given, but also the lack of freedom of choice point to a classical employment contract. Mr. Steier reported that only through individual cases in court are they able to determine if the worker is an employee or self-employed and that such processes supported by vida can take up to two years.

The next panel was opened by Karl Delfs, from the Road Department and responsible for collective bargaining at vida. Freelance workers in collective agreements are not common and not even legally clear. However, they have already been included in two different collective agreements with at least minimum hourly rates; and, it is also possible to demand a quota from freelance workers to employees. However, this requires cooperation from the Austrian Economic Chamber, which at the moment, could be difficult as there has been an increasing strain on social dialogue. The second panelist, Angela Pfister, discussed the European perspective with a short input on the planned Digital Service Act of the EU Commission which also deals with platforms. Closing this panel, Robert Walasinski presented existing international networks and initiatives of employees in the field of food delivery via platforms as well as successes in the struggle for recognition as employees and the conclusion of collective agreements and protests (October 8th, 2020 was an international day of action).

Live via Skype from Olso, Norway, Paul Olai-Olssen, a member of the works council at Foodora described the five-week strike they organised in order to get management to engage in collective bargaining. He gave insights into the organisation of the colleagues and the approach during the strike and was also available to answer questions of the audience in Vienna.

The conference came to a close with the presentation of the results of a digital survey conducted at the beginning on the most important subject areas which lead to a lively discussion among the participants centering around “same work, same rights”. This showed that with the first Rider’s Day, a movement was launched that advocates fair working conditions and a voice for everyone.